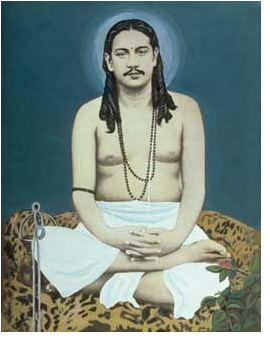 Paramahansa Swami Nigamananda Saraswati Dev was born to a virtuous Brahmin couple at Kutabpur in Nadia district (now in Bangladesh) in the year 1880. Named as ‘Nalinikanta’ by his father Bhubanmohan Chattopadhyaya and mother Yogendra Mohini he grew to boyhood drawing admiration of people for his extraordinary fearlessness, intelligence and forthrightness. He was, also, respectful and leadership was natural to him.
The Turning Point
As fate would have it, Nalinikanta lost his beloved mother at an early age, which shook him to the core. After this incidence, he lost his belief in God and turned extremely antagonistic towards religious rites, sadhus and ascetics. He convinced himself that ‘death’ is the ‘end’ of everything in one’s life. He decided that, hereafter, religion to him would be nothing other than ‘doing good to the fellow beings’ and leading a virtuous life.
Nalinikanta was married off to an extremely beautiful and intelligent girl named Sudhansubala Devi at the early age of 17 years. Further, after completing his study at the Dhaka Survey School, he took up jobs at various places to earn his livelihood.

But, soon Nalinikanta was rudely awakened from his disillusionment that death is the ultimate end of an individual being. Once, while serving at the Narayanapur estate (Zamindari) Nalinikanta was working late in the night. He suddenly saw the shadowy image of Sudhansubala standing at his table – sullen and silent. Sudhansubala was supposed to be away at Kutabpur at that time. Her image appeared there for a few moments only. Nalinikanta felt disturbed and the next day, rushed to his village Kutabpur. He came to know that Sudhansubala had expired just an hour before he saw her image at Narayanapur. Soon after, he happened to see the shadowy image of Sudhansubala several times in quick succession.
Now, he couldn’t wish away the fact that there must be ‘life’ after ‘death’. He solemnly resolved to get back his beloved wife from the other world at any cost. Never before in the history of mankind had any bereaved husband made such a resolution, being so much oblivious of the impossibility of his success in this regard.

In Quest Of Truth
Nalinikanta’s desperate quest to know all about the subtle phenomena of ‘life’ and ‘death’ and to get back his wife led him to the Theosophical Society at Adyar, in Chennai, India. There, he learnt Theosophy and was able to talk to Sudhansubala through a medium. But, he was not satisfied with the experience at all. To fulfill his desire to meet his dead wife as well as bring contentment to his seeking mind, Nalinikanta subsequently embarked upon an extraordinary path of spiritual practices which led him to realize the Truth and perfection in Tantra, Jnana, Yoga and Prema/Bhav – all the four ways envisaged in Sanatana Dharma to attain the highest spiritual goal. ‘Mahashakti’ (the embodiment of Cosmic Energy) appeared before him in the form of his wife Devi Sudhansubala and granted him the boon that he would be able to see Her in that form whenever he would so wish. Remarkably too, he attained and came back from Nirbikalpa Samadhi in Yoga. Earlier, his Jnani Guru Srimat Swami Satchidananda Saraswati had named him ‘Nigamananda’, in consideration of his sound comprehension of the Vedic (nigama) knowledge (jnana) with facility, sometime in 1904. 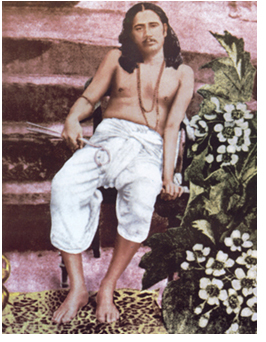 During the 1907 Kumbha Mela at Allahabad, Swami Satchidananda Deva conferred the title of ‘paramahansa’ on Sri Nigamananda in recognition of his spiritual merits in a huge gathering of leading sadhus and renunciates under the auspices of the then Shankaracharya of Sringery Math. Soon after, in spite of his extreme reluctance, SwamiNigamananda was directed by his guru Satchidananda Saraswati Dev to accept the responsibility of being the guru from him. 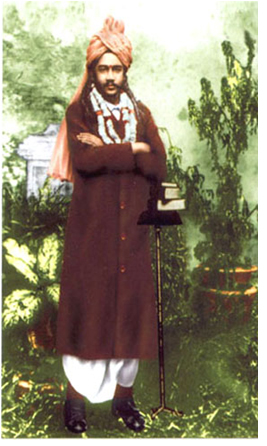 After Attainment Of Truth
With an urge to share his overflowing divine bliss with the multitude, Sadguru Swami Nigamananda entered into society to wake up a spiritually inert people.
In the prevailing atmosphere of ideological and spiritual confusion among his countrymen, he first sought to call the attention of the so called educated people for rediscovering the merits of Sanatana Dharma. He wrote five books – Bramhacharya Sadhana, Yogiguru, Jnaniguru, Tantrikguru, and Premikaguru – which are invaluable for any seeker on the path of spirituality. He edited and published a path breaking and reformist periodical ‘Arya Darpana’ in 1908 (one of the earliest periodicals of India). It was widely received as a trend-setting journal on religion and spirituality.
Generally reticent, he had always shunned publicity and public platforms; and preferred to speak to small groups of sincere devotees guiding them for their inner progress.
While leading a secluded life in Puri, Orissa, mostly, remaining merged in his Brahma-bhav, Swami Nigamananda had become inspired to establish the Nilachal Saraswat Sangha there in 1934. He directed his householder disciples, numbering a few, to come together under this Sangha in living the ideals set by him.
He had instructed his followers to strive to become ideal human beings at the first instance so as to reach the ultimate spiritual goal as a matter of course. He had directed his followers to lead an ideal householder’s life, according to the spirits of Sanatana Dharma. In his opinion a liberated soul is the right person to serve mankind in the right perspective. Looking forward to the dawn of the golden age of ancient times (Rishi Yuga) he has urged his followers to make sincere and concerted efforts through ‘Sangha Sadhana’ towards this end.

There was a harmonious blending of highest enlightenment (jnana) and universal love (bhakti) in the person of Swami Nigamananda. Rightly so, his ideology has been – “Shankarer Mata” (the Vedantic doctrine of the 8th century spiritual reformist Sri Sri Adi Shankaracharya), and “Gauranger Patha” (the path of devotion adopted by Sri Chaitanya Deva, the 14th century avatara of devotion, as the royal road to the spiritual destination i.e. God).
He established the unique tradition of “Bhakta Sammilani” (the annual congregation of devotees) for a spirited interaction between the two types of seekers — the household devotees and the renunciates, whereby, both would commune and proceed together in the path of spirituality.
Swami Sri Sri Nigamananda Saraswati Dev left his material body and attained ‘mahasamadhi’ (eternal union with the Supreme Soul) through yoga kriya (yogic techniques) on November 29, 1935 in Kolkata. He has told, – “I exist for eternity and will exist so forever. And, I shall keep guiding you even after I leave this body; exactly as I’m guiding you at present.”
The holy presence of Sri Sri Thakura Nigamananda is felt and his reassuring voice is heard in the hour of need by his innumerable followers, till today.